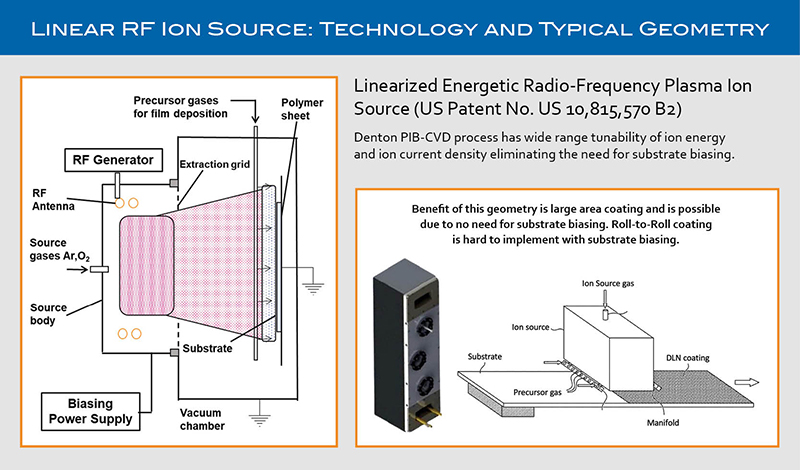 The process tunability of PIB-CVD makes it optimal for many thin film applications.

The inherent tunability of PIB-CVD enables a wide range of film properties including flowable, soft, thin film encapsulation layers as well as hard, highly hydrophobic, and optically clear coatings. As a result, multilayer and gradient coatings can be produced in a single chamber from a single source. Coatings can be applied to substrates ranging from flat films to high aspect ratio via fills.

Integrating the Next Generation

The Phoenix PIB-CVD is based around Denton’s patented linear ion source, which enables a new class of thin film deposition called Plasma Ion Beam CVD (PIB-CVD). This system allows ion energies and gas ratios to be adjusted to suit the needs of applications as varied as OLED Encapsulation, mobile glass cover, hard coatings, hydrophobic coatings, and automotive displays among others.

Current OLEDs are used to create digital displays in devices such as television screens, computer monitors, etc. Rigid OLED displays are encased in a glass sheet because glass is a durable barrier and is easy to handle. For the next generation of flexible OLED displays, the glass sheet is replaced with a transparent Thin Film Encapsulation layer.

Denton’s unique, patented Plasma Ion Beam CVD technology can deposit both inorganic and organic layers in a single system whereas two separate systems are used in limited production today. The linear ion source can control both ion energy and ion current density, the key to being able to deposit organic and in-organic layers in a single system. This source can be scaled to 2 meters in length, making it suitable for depositing on large area sheets of plastic or very thin glass. The source is also easy to maintain, making the Phoenix PIB-CVDa perfect solution for high volume production needed to commercialize flexible OLED displays.

Diamond-like nanocomposites (DLN) are films with a wide range of properties that can not only enhance the durability of displays but also can be used in fingerprint-free displays where optical transparency, hydrophobicity and oleophobicity are required. This coating process could be explored by varying parameters for different tunability outcomes.

The low-friction and low-wear coatings combined with low internal stress and good adhesion make this type of coating an excellent candidate for tribological applications, the opto-electronics industry, and anti-reflective applications.

Using PIB-CVD for automotive applications eliminates a common process step: adding the adhesion layer. Most PECVD hard coats require a wet chemical hard coat as the adhesion layer, but Denton’s PIB-CVD can be applied directly to the uncoated plastic substrates.

For more information, listen to our presentation: Tunability of PIB-CVD Organosilicon Thin Films on Flexible Substrates.